We understand that the race for the Lambton Ward is about to heat up with word coming from right across the spectrum that Ian McKinnon CNZM has decided not to seek re-election.

McKinnon has made clear to his colleagues that he will be retiring and will begin to pull back from public life. We have been told that he intends to announce his decision within the next few weeks.

As well as Deputy Mayor, he is the Chancellor of Victoria University and holds the Council directorship on the Wellington Airport board. Despite his age, McKinnon isn’t a time server, he was first elected in 2004 and is completing his third term – which practically makes him an infant in WCC terms!

His retirement will mean that there are two gaps in the Lambton Ward, with Stephanie Cook already announcing she won’t stand, and could see more challengers come out of the woodwork over the next few weeks. At the moment in Lambton we have a Green-lefty (Pannett), a centre lefty (Cook) and a centre right (McKinnon) and there is no reason to think that split would change drastically.

While it will undoubtedly create a gap on the centre-right for a candidate like Nicola Young, in most multi-member wards there will often be a gender balance so it could also be good news for the likes of Mark Peck despite his brand being at the other end of the spectrum from McKinnon. For example, Northern and Lambton both have two women and one man, while Eastern and Onslow-Western both have two men and one woman – while this doesn’t always happen, Wellingtonians are pretty good at voting in a balanced line up. Well, in terms of demographics anyway.

I guess the question is will the Greens change their mind again on standing two candidates? Oh and will Ritchie continue her occupation of the Council chamber? Surely not, but McKinnon’s decision will probably see more candidates announce and at the very least, some new talent and a new deputy mayor. 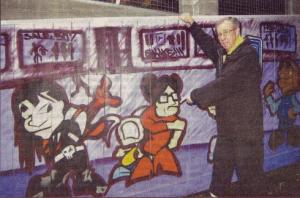 2 responses to “McKinnon to bow out”